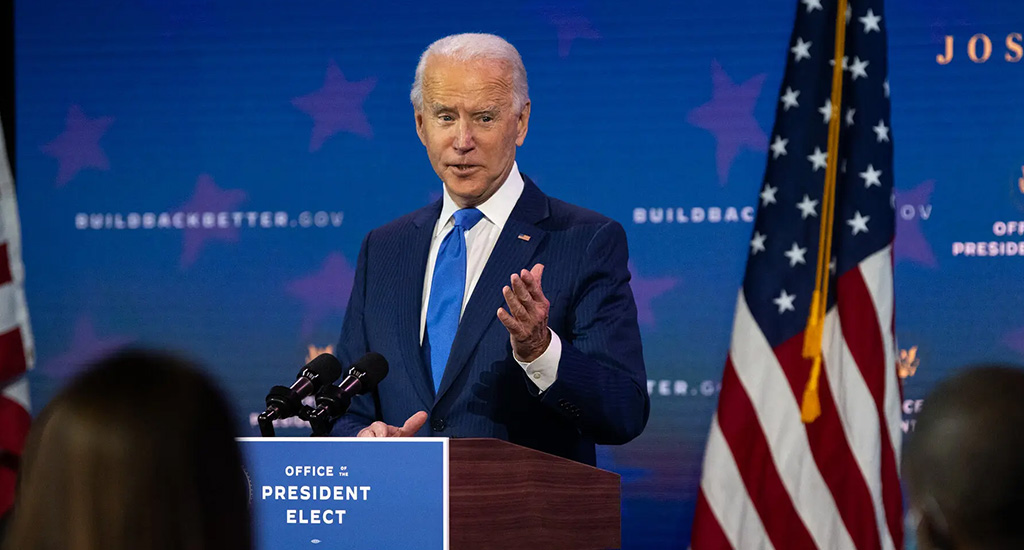 The president-elect introduced key nominees in Delaware, while lawmakers exchanged new proposals with prospects for a deal still dim.

WASHINGTON — President-elect Joseph R. Biden Jr. on Tuesday introduced the economic team he will rely on to help rebuild the U.S. economy at a perilous moment, with coronavirus cases soaring, the Federal Reserve chair warning of challenging months ahead and lawmakers in Congress still struggling to reach agreement on a rescue package.

Mr. Biden, speaking in Delaware, called on Congress to pass a substantial relief package to help keep businesses, households and local governments afloat while his Treasury secretary nominee, Janet L. Yellen, called the damage done so far “an American tragedy” that could lead to long-term devastation if not quickly corrected.

“Right now, the full Congress should come together and pass a robust package for relief to address these urgent needs,” Mr. Biden said.

But he acknowledged that any stimulus agreement would necessarily fall far short of the trillions of dollars that Democratic leaders have insisted on for months, saying that “any package passed in a lame-duck session is lucky to be at best just a start.”

Mr. Biden’s nominees made it clear that they were thinking expansively about how to revive the U.S. economy and looking beyond just restoring lost jobs and livelihoods to finding ways to widen economic wealth, broaden opportunities and repair safety net programs.

“This is a moment of urgency and opportunity unlike anything we’ve faced in modern times,” said Cecilia Rouse, Mr. Biden’s nominee to lead the Council of Economic Advisers. “The urgency of ending a devastating crisis. And the opportunity to build a better economy in its wake — an economy that works for everyone, brings fulfilling job opportunities and leaves no one to fall through the cracks.”

But those goals, which were at the center of Mr. Biden’s campaign, are likely to run into obstacles in Congress, where Republicans, who spent the past four years on a spending spree, have resurrected their concerns about the federal deficit. They have cited it as a reason to forgo the kind of large stimulus package that Mr. Biden and other top Democrats have said is needed.

The political divisions were on display Tuesday, as a bipartisan group of centrist senators announced in the morning that they were working on a $908 billion compromise stimulus package. By the afternoon, Senator Mitch McConnell of Kentucky, the majority leader, announced that he had been discussing his own proposal with Trump administration officials and Representative Kevin McCarthy of California, the minority leader.

That package would be hundreds of billions of dollars smaller than the bipartisan plan — and thus a nonstarter with Democrats. But Mr. McConnell seemed to suggest that President Trump would not sign a more expansive bill, reminding Republicans in a private conference call and reporters during a news conference that a presidential signature is needed.

The continued likelihood of congressional gridlock before Inauguration Day threatens to saddle Mr. Biden’s economic team with dim prospects come Jan. 21, when it will confront an economy that has seen a slowdown in hiring growth, manufacturing activity and other key measures in recent weeks. Millions of Americans are set to lose unemployment assistance at year’s end. Others could face eviction and foreclosure as government moratoriums expire.

“The pace of improvement has moderated,” the Fed chair, Jerome H. Powell, told the Senate Banking Committee on Tuesday, saying the rise in virus cases was “concerning and could prove challenging in the next few months.”

“The risk of overdoing it is less than the risk of underdoing it,” Mr. Powell said.

Administration officials have shown little sign of worry about recent economic developments, insisting the recovery is on track while Mr. Trump continues his legal quest to overturn his re-election defeat at the polls.

Treasury Secretary Steven Mnuchin, appearing alongside Mr. Powell, downplayed the broader risks facing the economy and blamed economic shutdowns in some states for slowing progress. While he called for targeted relief for sectors that have been hit hardest by the pandemic, like restaurants and airlines, he said the economy had recovered faster than many had expected and that the economy had “regained 58 percent of the lost jobs.”

He defended his decision to end several of the Fed’s emergency lending programs on Dec. 31. He has also requested that the central bank return the Treasury funds supporting those programs. Democrats said the moves amounted to economic sabotage.

“Either you’re purposefully trying to stop President-elect Biden and Janet Yellen from getting to work for the people we all serve, or you’re so delusional that you think because the stock market is back up, everything is fine,” said Senator Sherrod Brown, Democrat of Ohio. “Either way, it’s malpractice.”

Mr. Powell, who told lawmakers that the Fed would have preferred to keep those lending programs going while acknowledging that it was Mr. Mnuchin’s place to decide, painted a more dire picture of the economic outlook. He pointed to continued uncertainty around the speed of a vaccine rollout, the reality that millions remain out of work and the fact that small businesses could fail in the winter months.

“We do have a long way to go,” Mr. Powell said. “We’ll use our tools until the danger is well and truly past, and it may require help from other parts of government as well, including Congress.”

Republicans insist that the economy is recovering and that the United States does not need to borrow more money for another big relief package, while Democrats insist that a large jolt of stimulus is necessary and that now is not the time to worry about deficits.

“There’s a reason states and localities have to have a balanced budget but we’re allowed to have a deficit to deal with crises and emergencies as we have in the past,” Mr. Biden said. “We have to keep vital public services running, have to give aid to local and state governments to make sure they can have law enforcement officers, firefighters and educators as we did in 2009.”

After months of deadlock on Capitol Hill, a bipartisan group of senators tried to move things forward with the $908 billion compromise stimulus proposal, funded in part by repurposing the money that Mr. Mnuchin clawed back from the Fed lending programs.

The proposal, spearheaded by two centrists — Senators Joe Manchin, Democrat of West Virginia, and Susan Collins, Republican of Maine — and a handful of senators from both parties, has not been publicly endorsed by either Speaker Nancy Pelosi of California or Mr. McConnell.

Intended as a stopgap measure to last until March, it would restore federal unemployment benefits that lapsed over the summer, but at half the rate, providing $300 a week for 18 weeks, and does not include another round of checks for every American. The measure would provide $160 billion to help state, local and tribal governments facing fiscal ruin — a fraction of what Democrats had sought. Also included was $288 billion to help small businesses, restaurants and theaters, and a short-term federal liability shield from coronavirus-related lawsuits.

In contrast, the framework circulated on Capitol Hill by top Republicans does not include funds for state and local governments and curtails a short restoration of federal unemployment benefits even further.

“The advantage of our compromise bill is it has bipartisan, bicameral support,” Ms. Collins said. “I want a bill that can become law.”

The bipartisan plan is an attempt to find a middle ground between the dueling stimulus proposals that Democrats and Republicans have haggled over for months. Its cost is less than half of what Democratic leaders had pushed for in the weeks leading up to the election but nearly double the latest proposal from Republican leaders.

It includes most of the main ingredients that Mr. Biden and Democratic leaders have called critical for a deal, a possible sign that it could form a basis for a compromise that Mr. Biden could get behind.

Asked about the plan by reporters after his event with his economic team, Mr. Biden replied: “I just heard about it. I’ll take a look at it when I get back.”

The fresh attempt at a bipartisan compromise came as Ms. Pelosi and Mr. Mnuchin held their first phone discussion since late October, when they had a flurry of pre-election conversations that failed to culminate in a deal. Ms. Pelosi said she and Senator Chuck Schumer of New York, the Democratic leader, had sent a new proposal of their own to Republican leaders on Monday.

John Lettieri, the president of the Economic Innovation Group think tank in Washington, which has pushed for more small-business aid, said the bipartisan plan “seems close to being the sweet spot” for a possible compromise — if one is possible.

Some Senate Republicans on Tuesday reiterated opposition to any deal that sends money to support state and local government budgets, with Senator John Kennedy of Louisiana challenging Mr. Powell at the hearing about whether states are really in such bad straits and suggesting the money would be used to shore up shaky pension funds.

“I’ve always said, I think it’s an area that’s worth looking,” Mr. Powell said, noting that states are among the largest employers in the economy and that they provide critical services.

Mr. Biden’s appointees all sounded an urgent tone as the incoming administration faces the prospect of a double-dip recession.

His nominees, all of whom must win Senate confirmation, talked about the pain of the pandemic recession, noting that it was falling hardest on traditionally marginalized Americans and widening the divide between the rich and the poor.

Ms. Yellen, a former Fed chair and an academic labor economist, said she had gone into economics “because I was concerned about the toll of unemployment on people, families and communities.” She warned that inaction in the face of the current economic crisis “will produce a self-reinforcing downturn causing yet more devastation.”